The SCCF Sea Turtle Program surveys 18 miles of beach, from the Sanibel lighthouse to Blind Pass, every morning from April – October. Over 100 volunteers help with the daily search for tracks that the sea turtle left behind when she emerged from the sea the night before. Sometimes sea turtles go back to the water without laying eggs, which is known as a non-nesting emergence. If we determine that the turtle successfully laid eggs, the nest is watched over until the eggs hatch and there are signs of the hatchlings crawling to the Gulf. Storms, humans and predators may disturb or destroy the nests, reducing their survival.  After the nests hatch they are evaluated to determine the number of hatchlings that successfully emerged.

The 2019 season began on April 27 with the first nest laid on the East End. Nesting picked up quickly around the third week in May, and our nest numbers flirted with the record for much of the season. Ultimately, this year finished with totals that were not unprecedented but several that were the second-highest ever recorded.

We finished with 848 total nests (816 loggerheads and 32 green turtles), second only to the 2017 season total of 872 nests (838 loggerheads and 34 greens). The second highest total for green nests was also documented this year! At 192 loggerhead nests, Captiva was just shy of the record of 194 nests set in 2016. The 624 loggerhead nests on Sanibel marked the third highest nest counts on record. 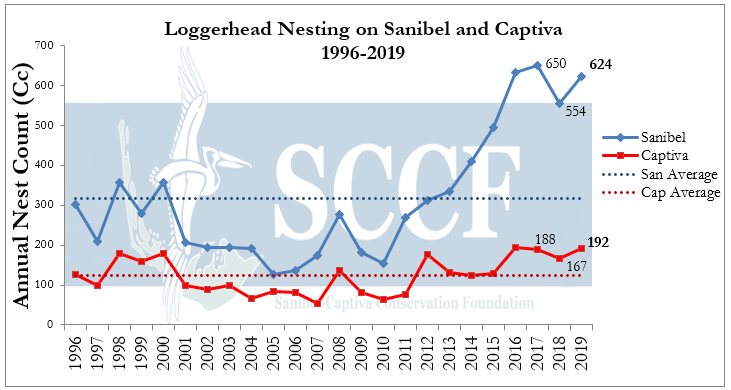 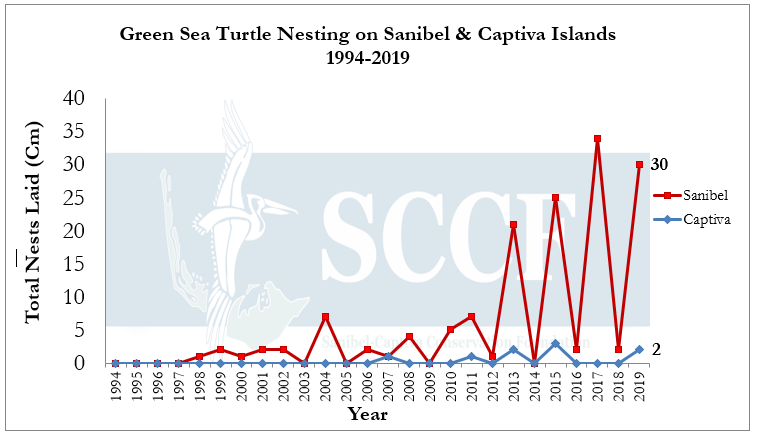 While high nest counts are encouraging and may indicate a healthy population, successful nests are vital to long-term conservation. A record number of nests that never hatch or do not produce very many hatchlings do not significantly contribute to future generations of sea turtles. The more important metrics determining a season's contribution to recovery are the hatching and emergence successes of the nests on the beach – the more hatchlings that emerge, the greater the potential contribution to the population.

This nesting season brought an exciting new record of 48,442 hatchlings reaching the sea! These positive results were partially because we were spared from any major storm events, with only three complete nest losses due to washouts this year (compared to 31 in 2018). While we were fortunate with this threat, we observed an increase in documented incidents where coyotes may have impacted hatchlings as they emerged from the nests.