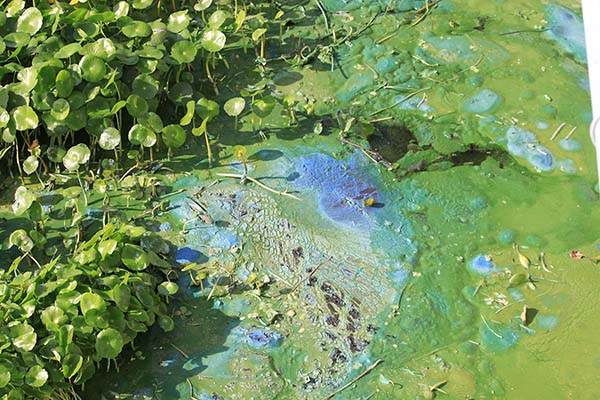 The following is part of a regularly occurring series that will explore how building coastal resilience is interwoven with a variety of local issues and topics.

In Florida, we’re used to changing our behavior—avoiding swimming and shellfish—every time coastal warnings go out about local pockets of red tide. If you were to look at a drop of red tide-affected water under a microscope, you’d see a multitude of Karenia brevis cells haphazardly darting around, each propelled by two tail-like flagella that wrap around their bodies. Though they look unassuming, these cells can produce toxins that can have serious health effects for people who inhale or ingest them. This is why we classify the overgrowth of K. brevis as something called a harmful algal bloom. So, what are harmful algal blooms, why do people pay attention to them, and how can we also view them through the lens of coastal resilience? Though we might be more used to hearing the word “bloom” in reference to the blossoming of flowers, it’s also a standard term used by marine and coastal researchers. The word is often applied to the rapid growth of different kinds of plankton. Plankton are aquatic organisms that can often move short distances within their watery environment; their location is primarily dictated by the influence of currents and other outside physical forces. While there are many different types of plankton, “algal blooms” often refer to large numbers of tiny plant-like phytoplankton. The overgrowth of larger aquatic plants like seaweeds can also be characterized as algal blooms.

Now where does coastal resilience come in? Algal blooms are a natural occurrence when conditions are balanced in just the right way to support speedy growth. However, we can classify them as harmful or nuisance algal blooms when they impact humans or impair natural systems. Beyond K. brevis, we have many phytoplankton species in Florida—like freshwater cyanobacteria—that can proliferate rapidly and produce toxins under the right conditions. In addition to affecting human health, these toxins can kill or sicken aquatic life, which impacts local seafood sales and tourism. Thick patches of algae can block sunlight to vegetation anchored below—vegetation that could help to stabilize substrate and protect against wave action. If there aren’t enough zooplankton and other consumers to graze down excessive amounts of algae, then bacteria step in to do the job while simultaneously using large amounts of dissolved oxygen. This can result in oxygen-starved “dead zones” which can lead to mass suffocation of surrounding aquatic life including fish.

Research further suggests that changing climactic conditions may be shifting the timing, location, and extent of blooms. The Intergovernmental Panel on Climate Change has reported that harmful algal blooms have increased in coastal areas since the 1980s and their associated risk to human populations is projected to increase as a result of climate change and other stressors.

With the knowledge that algal blooms can sometimes have harmful impacts, what are we already doing and what can we do to alleviate these and foster more resilient systems? We can support monitoring efforts that keep an eye on when and where they occur, and research efforts meant to better understand them. For example, SCCF has been contributing to research around local bloom dynamics, and has been releasing weekly reports characterizing water quality conditions in the Caloosahatchee Watershed since 2011. While the complex interplay of conditions, such as temperature and light levels, that trigger and sustain large-scale bloom events is not always clear, high nutrient levels in local water likely plays a significant role. Important ways to reduce nutrients range from personal practices, such as using less fertilizer on your lawn and properly disposing of pet waste, to advocating for legislation that sets nutrient limits and best nutrient management practices for local waters.