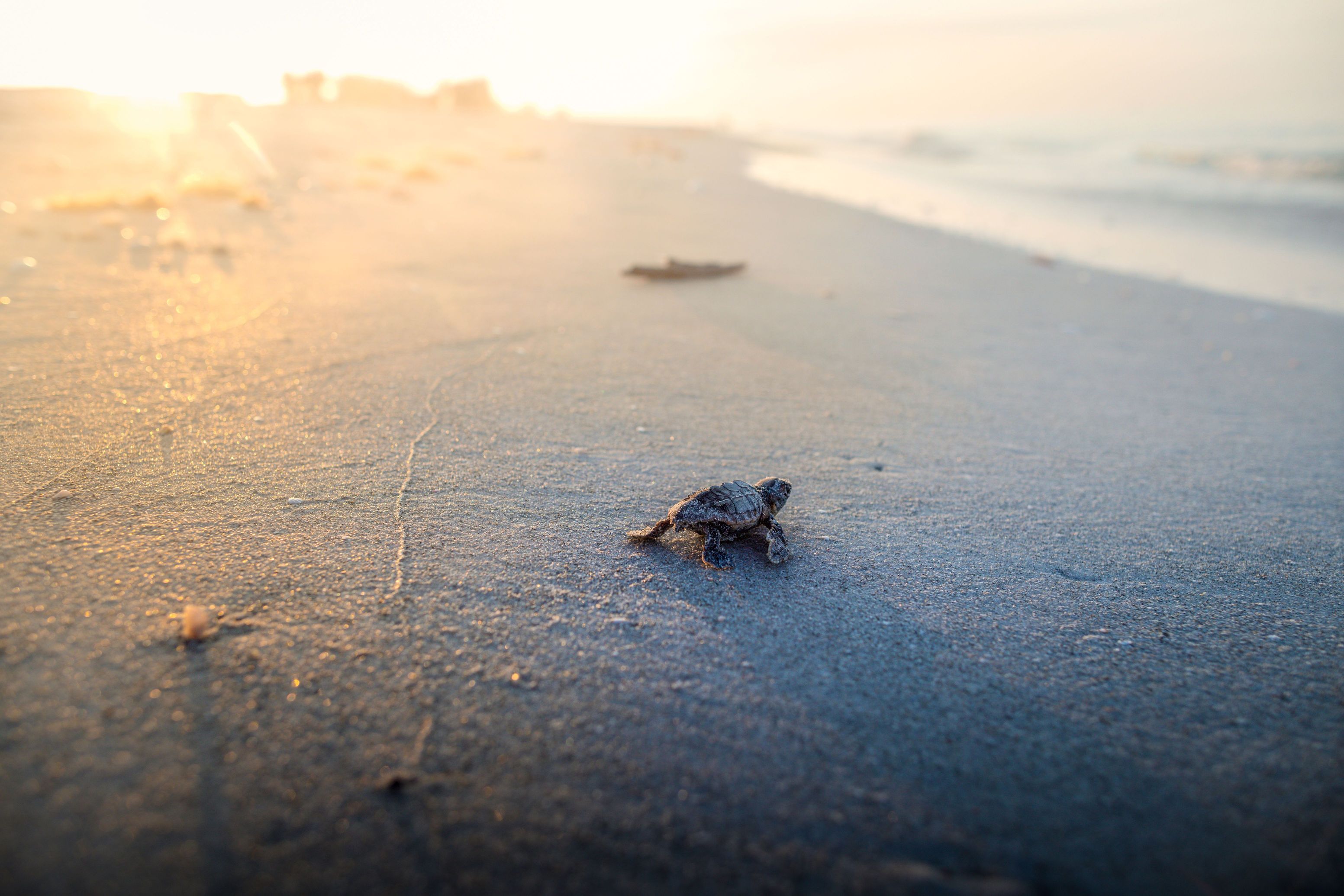 The following is part of a regularly occurring series that explores how building coastal resilience is interwoven with a variety of local issues and topics.

SCCF Coastal Wildlife Director Kelly Sloan recounts what it’s like catching the right sliver of time to watch loggerhead (Caretta caretta) hatchlings, newly introduced to the world, crawl and fight their way to the shining ocean surf: “Ancestors of modern-day sea turtles have been undergoing the nesting process for millions of years and being lucky enough to experience a hatchling emergence, or "boil,” is truly awe-inspiring. Since only about 1 in 1,000 survives, you can't help but think of all the obstacles the little guys will face and wonder which ones will come back in a few decades to nest on these beaches.”

The creatures we identify today as our “modern” sea turtles evolved from a common ancestor about 110 million years ago. While these animals have stubbornly persisted in a world that has experienced radical climactic shifts over that period, the current rate of climate change paired with patterns of human development may be casting a shadow of doubt over their future. The fate of sea turtles especially hinges on both their ability to successfully nest on the beaches they often visit during the stillness of night, and then on the later survival of the tiny hatchlings that do manage to ditch their eggshells for bluer pastures.

Firstly, there are the added threats to survival. As days continue to warm, incubating sea turtle nests are starting to heat up. Like in many other species of reptiles, the temperature fertilized sea turtle eggs are exposed to during key stages of embryonic development determines if the resulting tiny turtles that scramble out of a nest after hatching will be male or female. Cooler temperatures give way to male sea turtles, while females are produced from warmer nests.

The higher heat index days expected with climate change could considerably skew the resulting sex ratios of sea turtle populations, producing a bevy of females and a scarce supply of male partners. There is evidence this may already be taking place. Dr. Jeanette Wyneken of Florida Atlantic University has been studying hatchling sex ratios in Florida for decades. Her sampling data shows that some years have resulted in males hatched from nesting sites, but in other years 100% of the hatchlings sampled are female.

In addition, high temperatures may also hinder the health and survivorship of hatchlings. And, while not as well studied as other environmental drivers, rising moisture levels may compound temperature effects or pose additional challenges to sea turtle reproductive success. Led by Coastal Wildlife Director Kelly Sloan, SCCF sea turtle biologists monitor temperature and moisture of nests for a variety of reasons. In recent years, they have also begun exploring these factors to better understand how vulnerable sea turtles on Sanibel and Captiva are to rising temperatures compared to other parts of Florida. For example, the team monitored temperature and moisture for nests during the 2019 nesting season along with hatchling sex information and plans to have the data analyzed and available soon.

Next are the factors that shape habitat; sea turtles are incredibly reliant on the quality of nesting grounds. In cases where a beach may already be subject to erosion, decreasing shoreline elevations could put nests in line for increased flooding risks. The rush of water introduced by episodic storm surge can essentially drown sea turtle eggs that depend on oxygen exchange with the surrounding air. More gradual processes like sea level rise could narrow the expanse of beach not subject to high tide flooding and available for successful egg laying.

Another challenge is that some of these animals instinctually show a strong propensity for revisiting the same locations again and again to nest even if they would be better served by seeking out new sites.

So how will sea turtles do with the looming changes that are coming down the pike? Clearly, they’ve shown their rugged resolve for enduring through millions of years of global shifts. However, given that the climate is changing at an unprecedented rate, ecologists are unsure if sea turtles, like many other vulnerable organisms, have the capacity to acclimate fast enough.

Sloan confirms this by saying “This is precisely why part of the efforts of SCCF’s sea turtle program is aimed at research and monitoring that can shed light on how Sanibel and Captiva’s sea turtle populations are doing and the ways they are influenced by their environment.”

The plight of sea turtles is also an apt reminder of the tenuous balancing act of achieving resilience in a way that benefits both humans and our wildlife. Hardening the coastline with structures like seawalls to safeguard shorelines and property sometimes results in the unintended hastening of erosion and narrowing and lowering of beach front. Using more “green” infrastructure options – like living shorelines or designs that incorporate pre-existing or restored sand dunes – instead of or in addition to these hardened options provides protection to the built environment while also supporting nesting and hatching success.

Actions that mitigate greenhouse gases will also improve outcomes from climate change for both natural ecosystems and people alike.  All this is to say that if we can be thoughtful in addressing our own vulnerabilities while working to also give our amazing local wildlife, like our sea turtles, the boost they need to do the same.