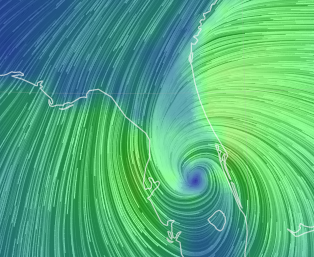 Conditions around Sanibel Island deteriorated quickly after the passing of Tropical Storm Nicole, with red tide blooming in high concentrations that have caused large swaths of fish kills on Sanibel beaches and substantial respiratory irritation to people breathing in the toxins. Red tide first began blooming after Hurricane Ian due to upwelling of nutrients from offshore and the substantial amounts of nutrient rich runoff from flooding and rainfall. Tropical Storm Nicole hit Florida just 43 days later and brought with it strong onshore winds that pushed the blooming red tide onshore. 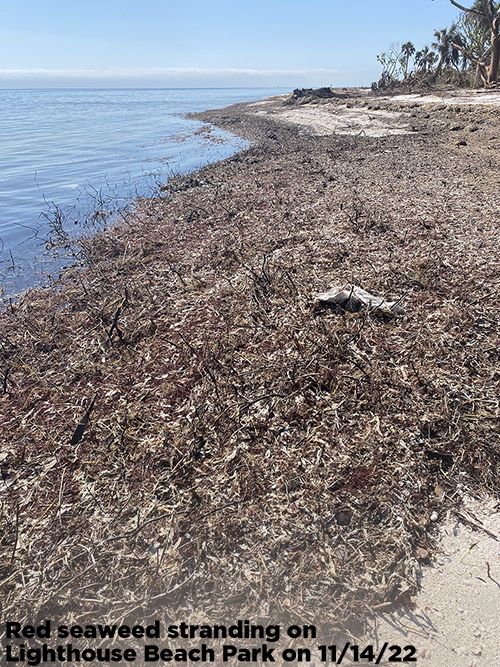 In addition to red tide, which is caused by microscopic phytoplankton called Karenia brevis, TS Nicole also pushed copious amounts of red seaweed on shore. Red seaweed is not considered toxic, but it can be a nuisance when pushed onshore, where it degrades and reintroduces nutrients back into the water, which can exacerbate the red tide bloom. When dead fish decompose in seawater, they also release nutrients back into the water, and rapid bacterial decomposition can create low oxygen zones that perpetuate the red tide bloom and cause additional stressors for marine life.

These natural, although devastating, phenomena were caused by two sequential storms that caused upwelling followed by onshore winds, and they were worsened by nutrient rich runoff. Although nutrients from Lake Okeechobee water releases have been found to contribute to feeding red tide, lake releases during this period have been minimal, with most water coming from our watershed. No releases have been made from the lake since TS Nicole hit, and flows to S-79 have been in the 14-day average optimal flow envelope (750 – 2,100 cubic feet per second) for 21 days since our recovery of high flows during Hurricane Ian.

Lake Okeechobee levels are at their highest point this year (16.22 feet), and the U.S. Army Corps of Engineers is now considering making releases from the lake to protect its ecology and so that levels are low enough when the wet season begins next summer.

SCCF has requested that the Army Corps keep releases to the Caloosahatchee Estuary within the lower end of the optimal flow envelope and consider other outlets from the lake for releases while the red tide bloom is raging off the coast adjacent to the mouth of the Caloosahatchee. This should help to minimize the nutrient loading to our area and give us some time to see how the red tide bloom unfolds.