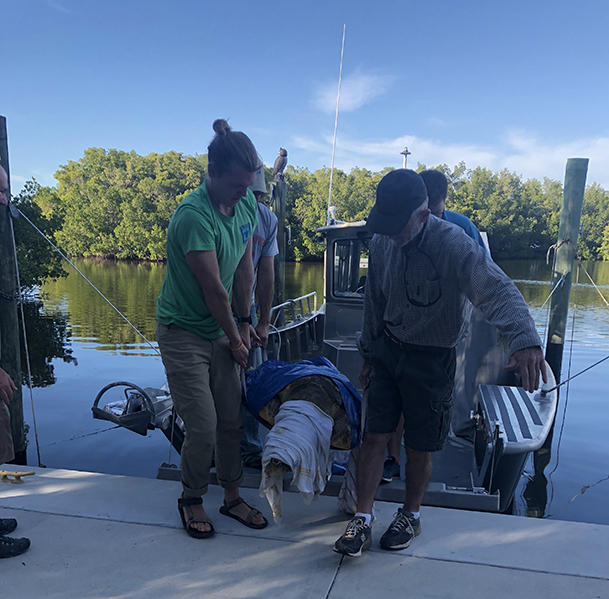 In addition to nest monitoring and research conducted during the nesting season, SCCF also holds a permit for responding to and documenting sea turtle strandings on Sanibel and Captiva islands. A stranding refers to a sea turtle that is found sick, injured, or dead. Sick or injured turtles are quickly rescued and transported to a rehabilitation facility for evaluation and treatment. Data on all stranded turtles is collected, including species, location, size, and descriptions of injuries and abnormalities. The data are reported to the Florida Fish & Wildlife Conservation Commission for use at the state and federal levels to monitor mortality, categorize stranding events, and better inform management practices.

In 2021, SCCF documented a total of 43 stranded turtles (40 dead and 3 live). The majority of the strandings (29) were loggerheads (Caretta caretta), followed by 8 Kemp's ridleys (Lepidochelys kempii) and 6 greens (Chelonia mydas). Most stranded turtles could not be assigned a cause of death by an external examination (19), and many of these had missing limbs that were unidentifiable as pre- or post-mortem injuries. Definitive vessel-strike injuries were found in 11 strandings and 9 showed evidence of predator damage (shark-bite injuries). A single turtle was found entangled in a crab trap.

While the cause of some stranding cannot be easily determined, others can be more confidently identified, such as vessel strike injuries. Vessel strikes are widely acknowledged as a significant threat to all sea turtle species and continue to be one of the most common sources of mortality documented among our strandings year after year. Knowing it’s a significant threat, what can we do to help? When boating, slow down and remain vigilant! Even outside of nesting season, sea turtles are found in the waters surrounding our islands. It is important to abide idle-speed zones and keep your eyes peeled outside these zones for turtles near the water's surface. Slower speeds can reduce the potential for severe injury and may offer more time for turtles to evade an oncoming boat. When you’re out on the water, remember: Slow down and look around!