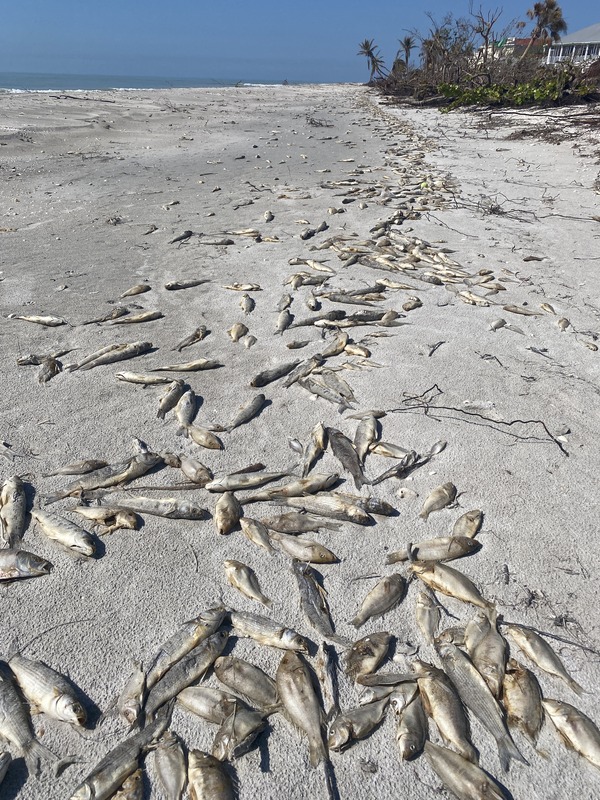 During the last active red tide bloom off our coast, about 80 islanders took part in a study that found a connection between exposure to airborne red tide and neurological symptoms.

The Sarasota-based Roskamp Institute parked a mobile lab on Sanibel where islanders with red tide exposure volunteered to provide blood samples. The study recruited southwest Florida residents and examined individuals during the periods of a red tide bloom and also when there was no bloom.

Results of the study released this summer found participants exhibited symptoms previously only associated with eating contaminated seafood during a red tide bloom.

It is the first study to suggest that certain people are susceptible to symptoms like neurotoxic shellfish poisoning (NSP), such as nausea, dizziness, and headaches from breathing red tide.

“Even though volunteers had not eaten contaminated shellfish, some reported symptoms similar to neurotoxic shellfish poisoning.  Among individuals who experienced NSP-like symptoms, more tended to have a prior medical history of migraine or chronic fatigue syndrome,” said Dr. Laila Abdullah, Research Scientist at the Roskamp Institute and lead author.

Prior to the study, it was well-known that eating red tide toxin-contaminated shellfish produces NSP which causes nausea, vomiting, diarrhea, numbness and tingling, dizziness, headache, and a reversal of hot and cold sensations.

About one-third of the study participants were from Sanibel and Captiva thanks to recruitment that was facilitated by SCCF. With the current active red tide bloom from Sarasota to south Lee County, the institute plans to resume the study.

“As with previous studies, we also found that participants also reported experiencing respiratory symptoms with increasing intensities of red tide blooms in the area,” she added.

The studies indicate that different people respond to the red tide toxins in different ways — from not reacting at all to having varying symptoms.

“We need to better understand why this happens. We don’t understand why that is the case nor do we know the dose levels of toxins that are needed to cause neurological symptoms,” said Abdullah. “There is still much to understand about this toxin and the levels of the threat it poses to human brain health.”

SCCF will make information available about the study once it is underway again. In the meantime, our partners at the Roskamp Institute wish the Gulf coast community well in dealing with the ongoing aftermath of Hurricane Ian.

“I would like to wish swift recovery from the aftermath of recent hurricanes to our participants who were impacted by these events,” Abdullah said. The study included 250 volunteers from five Gulf coast areas including Lee, Sarasota, Manatee, and Charlotte counties.