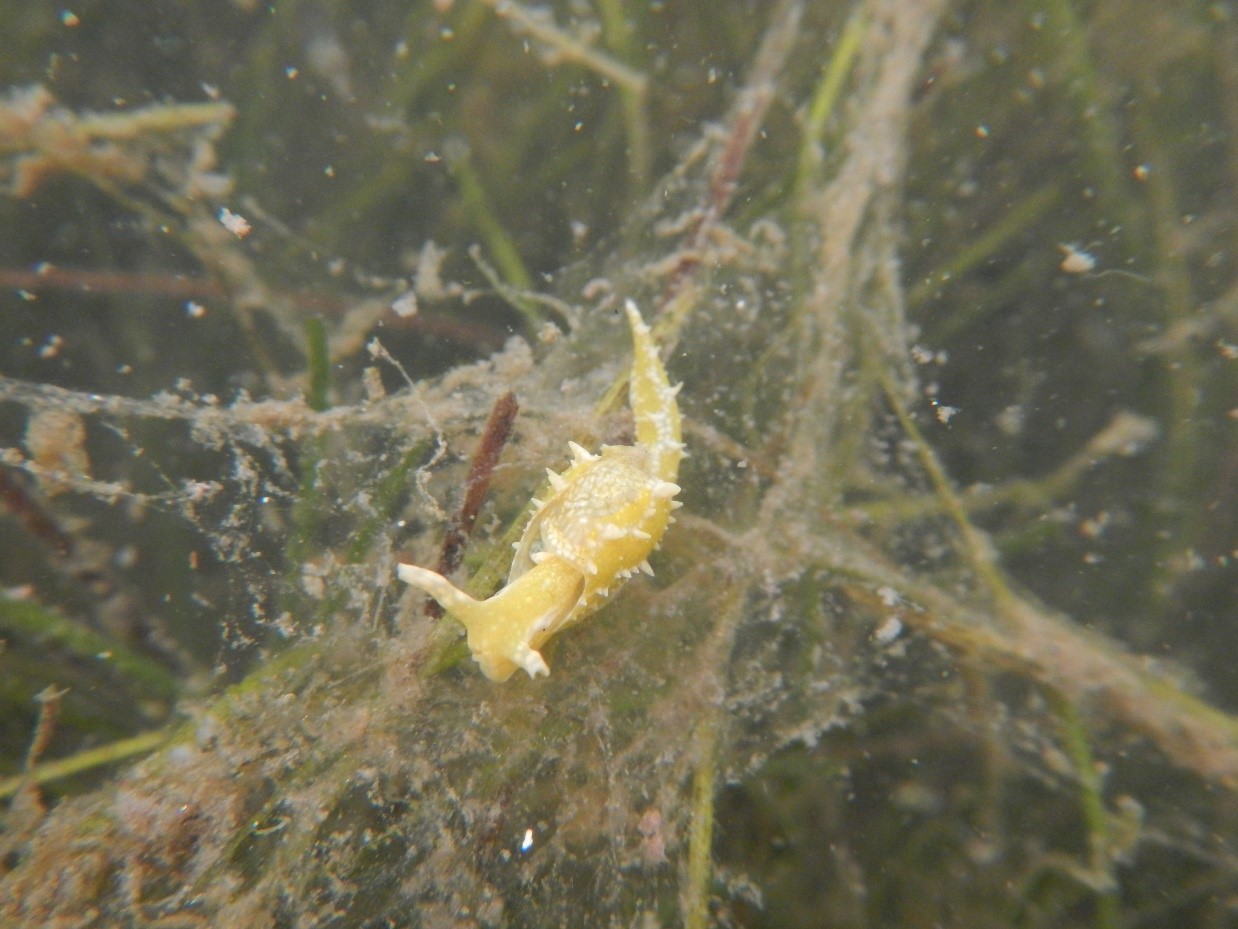 SCCF Marine Lab scientists have been out in the J.N. “Ding” Darling National Wildlife Refuge performing an annual survey of seagrass health this past week. Last year’s survey led to a mysterious abundance of a sea slug on a carpet of algae.

“We return to the same spots each year and count species and numbers of shoots, seagrass height and look at other measures to gauge trends in seagrass health. This year we will also be looking for the return of an unusual event discovered last year while doing these surveys,” said Research Associate Mark Thompson.

Last year, while surveying within the impoundments on Wildlife Drive, the first thing they noticed was a layer of carpet-like algae over much of the seagrass in our survey area.

“It is not good for the seagrass to be buried beneath a thick layer of algae and our survey found much of the seagrass was gone. The next thing we noticed was a swarm of small yellow and greenish slugs hanging on to the algae and sticking to our wet suits,” said Thompson.

After the seagrass survey, they took a closer look at the invertebrates since there seemed to be so many of them. They wondered what were they, why were they here and what they signified.

“Back at the lab we initially identified the slugs as a type of small sea slug called a sacoglossan,” he said. “They are particularly interesting because each different species of sacoglossan seems to hang out on a different specific type of algae. This spiked our interest!”

The carpet-like algae appeared be the reason for the sea slugs. Initially, the scientists identified the algae as Bryopsis. Using this as a guide we looked at the species of sacoglossans previously found in Florida which live on Bryopsis algae. We found a somewhat similar looking critter called Placida had been found on Bryopsis and guessed this is what we had.

Thompson and another researcher returned to the impoundments the next week and performed a survey of the slugs. They surveyed a larger extent of each impoundment and some areas immediately outside the impoundments.

“We found the mats of algae to be fairly extensive, covering maybe 5-10% of the area inside the impoundments. And, where we found algae, we found sea slugs. In some places we counted over 1000 animals per square meter,” he said.

The crazy abundance of sea slugs on the algae drove the lab to get more definitive answers to what they saw going on.

“We sent pictures to the author of a sea slug identification guide and she said our initial identification Placida was wrong and these critters were most likely Oxynoe instead. We then connected with Dr. Jose Leal at the National Shell Museum and inquired about the critter. He agreed that it was likely Oxynoe and suggested we contact the two foremost sea slug guys in the US, Dr. Angel Valdes at California State Polytechnic University and Dr. Patrick Krug at Cal State, LA, which we did immediately,” said Thompson.

After sharing photos and explaining where they found the sea slugs, both experts confirmed they were most likely Oxynoe, except that Oxynoe has only been associated with a different alga called Caulerpa.

“Remember it was thought that this type of sea slug is typically found on a specific type of algae only. After sharing our survey results showing some spots had over 1000 animals per square meter, Dr. Krug was very interested. He had never seen or heard of this brand of sea slug massing in these numbers,” he added.

Why was this Oxynoe sea slug eating the alga Bryopsis instead of Caulerpa and why were there so many of them? They double-checked the identification of the Bryopsis algae going step-by-step through the keys and solved one of the mysteries.

The Bryopsis became a species of Caulerpa fastigiata and the slugs hanging out on Caulerpa made much more sense. Studies have found that these animals eat the Caulerpa and then modify or concentrate the chemicals found in the Caulerpa to form toxic defense weapons.

They are so little, slow and tasty looking – they need to have a bad taste to survive. Additionally, Oxynoe are greenish for a reason – they are kleptoplastic, which means they steal chloroplasts from the Caulerpa they eat. The chloroplasts then continue to function inside the sea slug and provide it additional food.

“Have you ever wished you could eat plants and then photosynthesize?” asked Thompson. “Oxynoe can and do.”

One mystery was solved. However, the densities of Oxynoe they found had never been reported before. Researchers have previously reported that in general, population density is greater in subtropics compared to tropics. Florida is subtropical.

They have also correlated higher sacoglossan density with greater eutrophication – in other words – waters with higher nutrient concentrations can support larger numbers of sacoglossans.

The Caloosahatchee River is famously eutrophic, dumping tons of the nutrients, nitrogen and phosphorus into our estuary annually and supporting blue green algae blooms, red tide blooms, macroalgae (such as Caulerpa) blooms and now sacoglossan sea slug blooms on top of the macroalgae.

“Just as we had the historic red tide event of 2017-2018 after large discharges of nutrients from the Caloosahatchee watershed, we also have unheard of concentrations of an animal that thrives on algae which thrives on nutrients,” he explained.

The red tide event killed incredibly large amounts of sea life and their dead and decaying bodies released even more nutrient load into our coastal waters. Our coastal estuaries have been awash in nutrients for years creating large quantities of macroalgae such as Caulerpa fastigiata and providing an endless food source for the few things that eat Caulerpa such as the Oxynoe sacoglossan sea slug.

“This year, we will be on the lookout for seagrass and the algae that covered much of it last year and the sea slug Oxynoe which covered much of the algae. It seems this beautiful small creature may also be an indicator that our waters have very high concentrations of nitrogen and phosphorus. They may actually help us get rid of some of the excess algae our nutrient pollution produces,” said Thompson.

Much more needs to be studied to answer these questions. Are the population densities seasonal, how do they interact with and what are the impacts of large numbers of Oxynoe on other elements of the estuarine community? Can they actually control the amount of algae we have in an area? Stay tuned for an update.

Sign up for SCCF's Weekly Wednesday Update to keep up with our work.