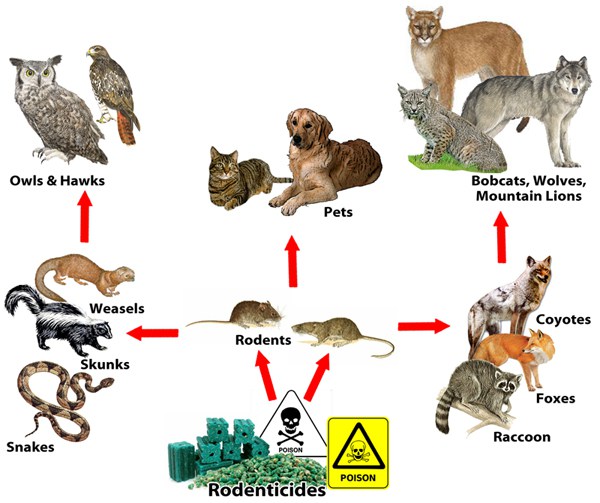 Not All Rat Poisons are Created Equal

SCCF applauds all homeowners who have decided to just say “NO” to rodent poisons that can kill our eagles, owls, and bobcats that eat the rat that ate the poison.  Killing all outside rats is impossible and should not be the goal… but using snap or electric traps on your porch or in your house is a necessity.  SCCF uses “slim Jims” as trap bait for our rodent issues.  Plugging up all the crevices where rats enter your home is still the best rat control, and you can pay your pest control company to do this.

But what about controlling rats at condominiums and homes that are overseen by management companies where “Just saying NO” to poisons is more complicated?  More complicated because who is going to empty the rats from the traps once they are caught?  Snap traps can be put in safety boxes outside just like poison can but, once again, who is going to dispose of the trapped rats?  In cases where poisons are going to continue to be used, the kind of rodenticide is very important.

It was brodifacoum that was found by CROW in the blood of the local eagle, “Ozzie,” after his death.  This same poison is blamed for a recent eagle death in Tampa.

Tell your pest control service and management company to not use second generation “anticoagulants” (brodifacoum is the most toxic, but also included are bromaiolone, difenacoum, or difethialone; they will be impressed that you know about these products.  The rats eat these 20 to 30 times before they die and they are now banned for use by homeowners by the Environmental Protection Agency but pesticide companies are still allowed to use them.

Demand that the rodenticide is not a second generation anticoagulant.  Recently a local pest control company responded to this demand, suggesting a product called bromethalin which is not an anticoagulant and is much easier on the critter who eats the poisoned rats.  This is definitely not perfect but it is safer for wildlife.  Other poisons that are not anticoagulants are cholecalciferol and zinc phosphide. Even the first-generation anticoagulant, warfarin, is easier on wildlife.

I hope this has helped if you can’t just say no to poisons, but be aware that all of these products have risks.  In California, 78% of mountain lions, 84% of foxes, and 92% of raptors tested had rodenticdes in their toxin screenings. Our barn owls are gone.  Has anyone seen a great horned owl lately? I wonder how much poison our island eagles and bobcats have ingested?

Do NOT use these second-generation anticoagulants:

These are not anticoagulants:

A first-generation anticoagulant that is easier on wildlife: