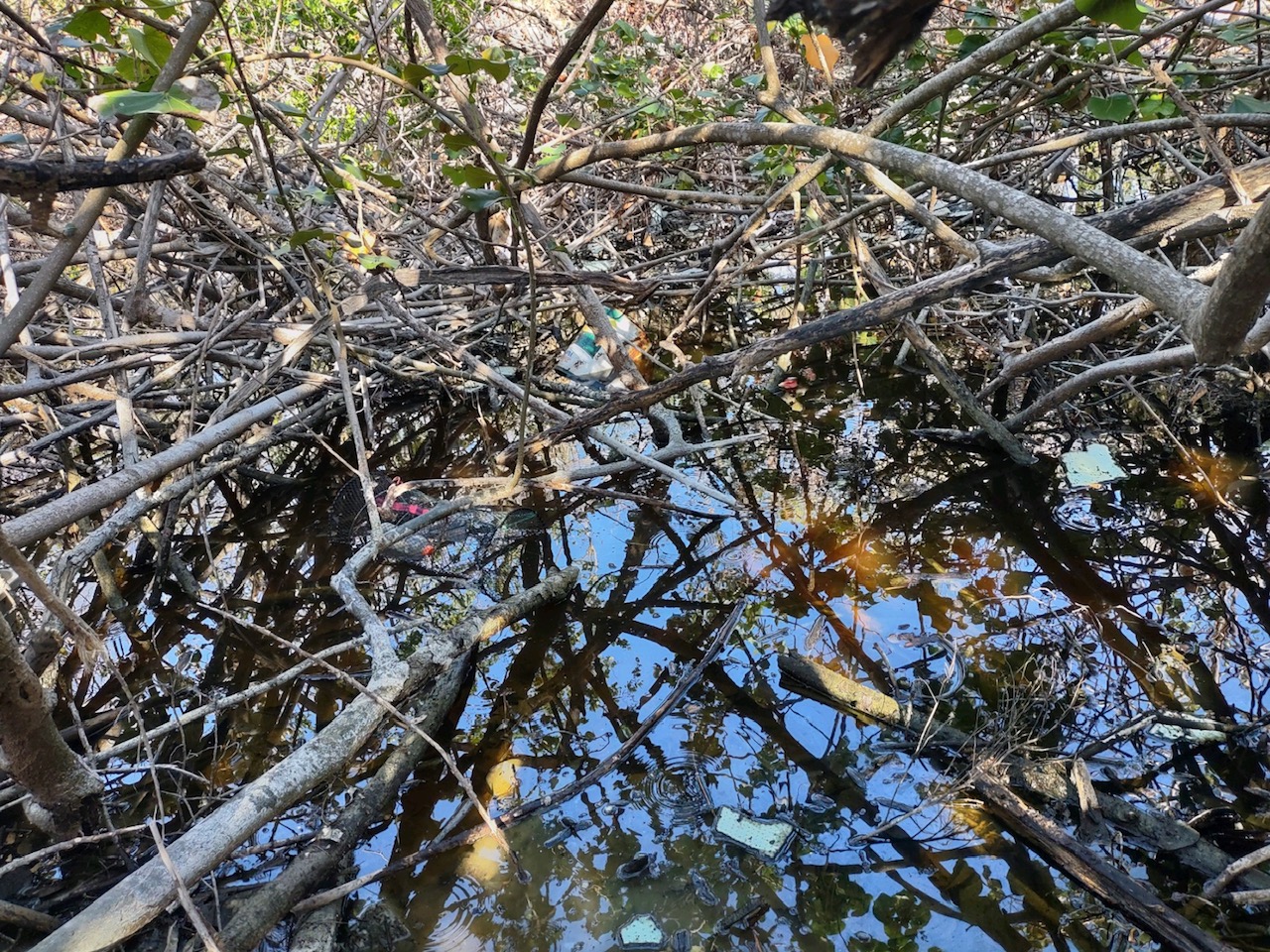 Hurricane Ian, which caused record-breaking damage to personal property and infrastructure on Sanibel, occurred at a time when the summer rains were dying down leading into the impending dry season.

“This has placed increased stress on most wildlife species on the island due to the inundation of salt water into the freshwater areas,” said SCCF Wildlife & Habitat Management Director Chris Lechowicz. “With substantial relief of frequent rains being approximately a half year away, many species will have it harder than others.”

Numerous local species can either store freshwater for long periods of time and/or absorb enough in the foods they eat to survive through a long dry period, such as gopher tortoises (Gopherus polyphemus).

However, aquatic species and even some semi-aquatic species are dependent upon mostly permanent sources of freshwater. For instance, the freshwater game fish such as bluegill (Lepomis macrochirus), largemouth bass (Micropterus salmoides), and warmouth (Lepomis gulosus) live exclusively in freshwater but have been known to thrive in salinities on Sanibel as high as 3 parts per thousand (ppt). The range is 0 ppt for freshwater to 35 ppt for sea water.

Amphibians, such as frogs, have a very permeable skin that absorbs moisture upon contact. They have a very low-tolerance for salt in the water. Our two native True frogs: Family (Ranidae), the pig frog (Lithobates grylio), and southern leopard frog (Lithobates sphenocephalus), spend a lot of time in freshwater bodies, as opposed to other species that may just use them to breed in or exist around those waterbodies.

“These two amphibian Sanibel species are of the highest concern of the nine species on the island, for this reason,” said Lechowicz. “These frogs still have not been documented existing post-hurricane.”

There have been many thoughts and ideas on what can be done to sustain wildlife over the long dry season with the extreme saltwater inundation that Sanibel has incurred. Sanibel wildlife agencies have considered adding scattered, temporary freshwater pools in wildlife-rich areas or even pumping previously freshwater pools with now high salinity water out. These options and others are being considered.

To help wildlife survive the long, dry winter, Lechowicz recommends that residents place small freshwater basins such as low tubs or water bowls in their yards to give passerby species a source of freshwater. Some residents have already done this. One person with a plastic koi pond cleaned it out due to saltwater intrusion and it is now a freshwater oasis.

“This natural event, although very unfortunate, is not a new phenomenon in our location,” said Lechowicz. “Many species on Sanibel are adapted to survive this type of event, but the possibility of some species being knocked way back or possibly extirpated is certainly feasible.”

The SCCF Marine Lab is testing lakes on Sanibel for salinity pre and post-Ian, measured in practical salinity units (PSU). For reference, the salt content of the Gulf of Mexico is 30-35 PSU. Freshwater is considered to be 0-1.5 PSU. 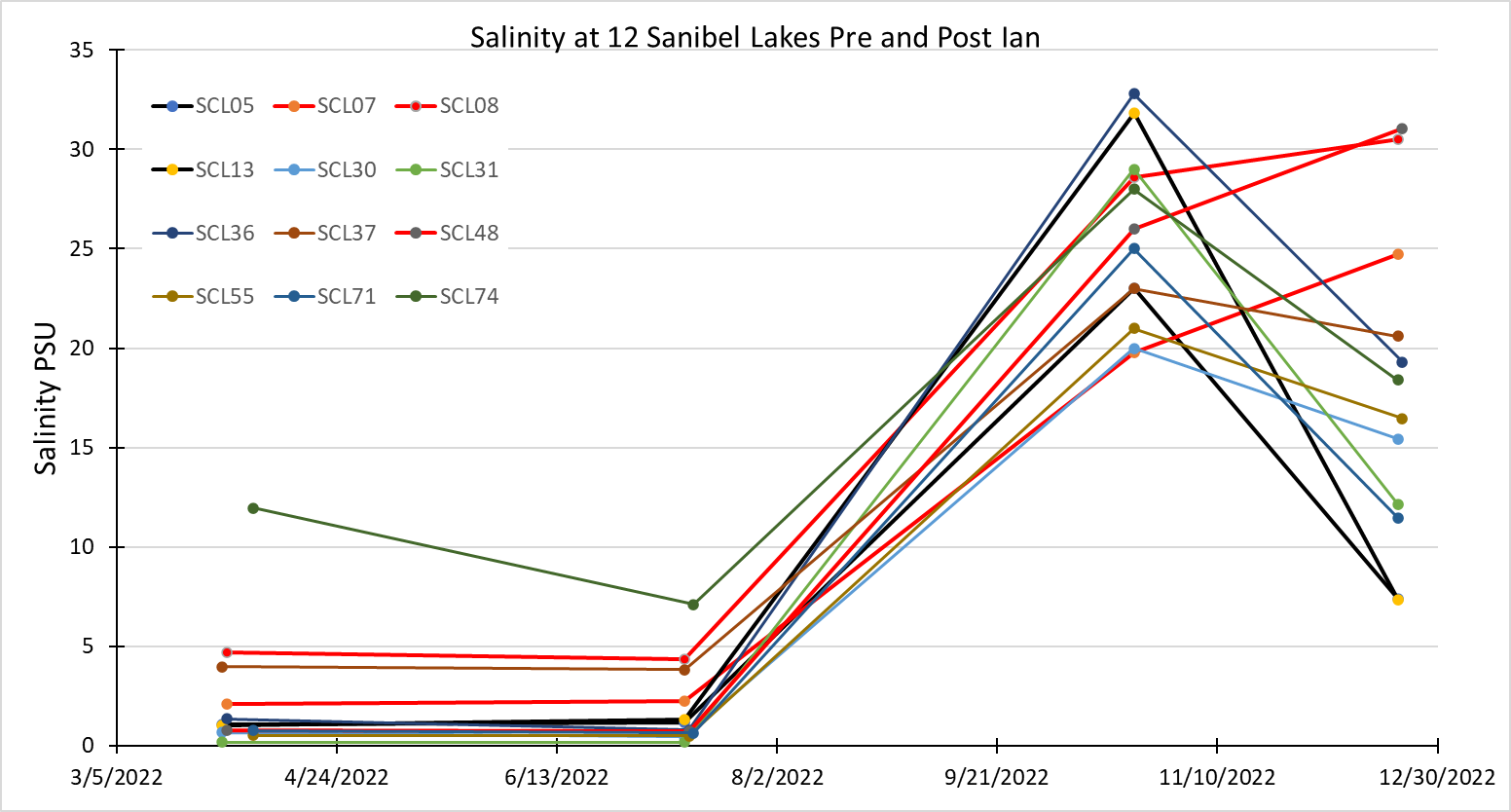