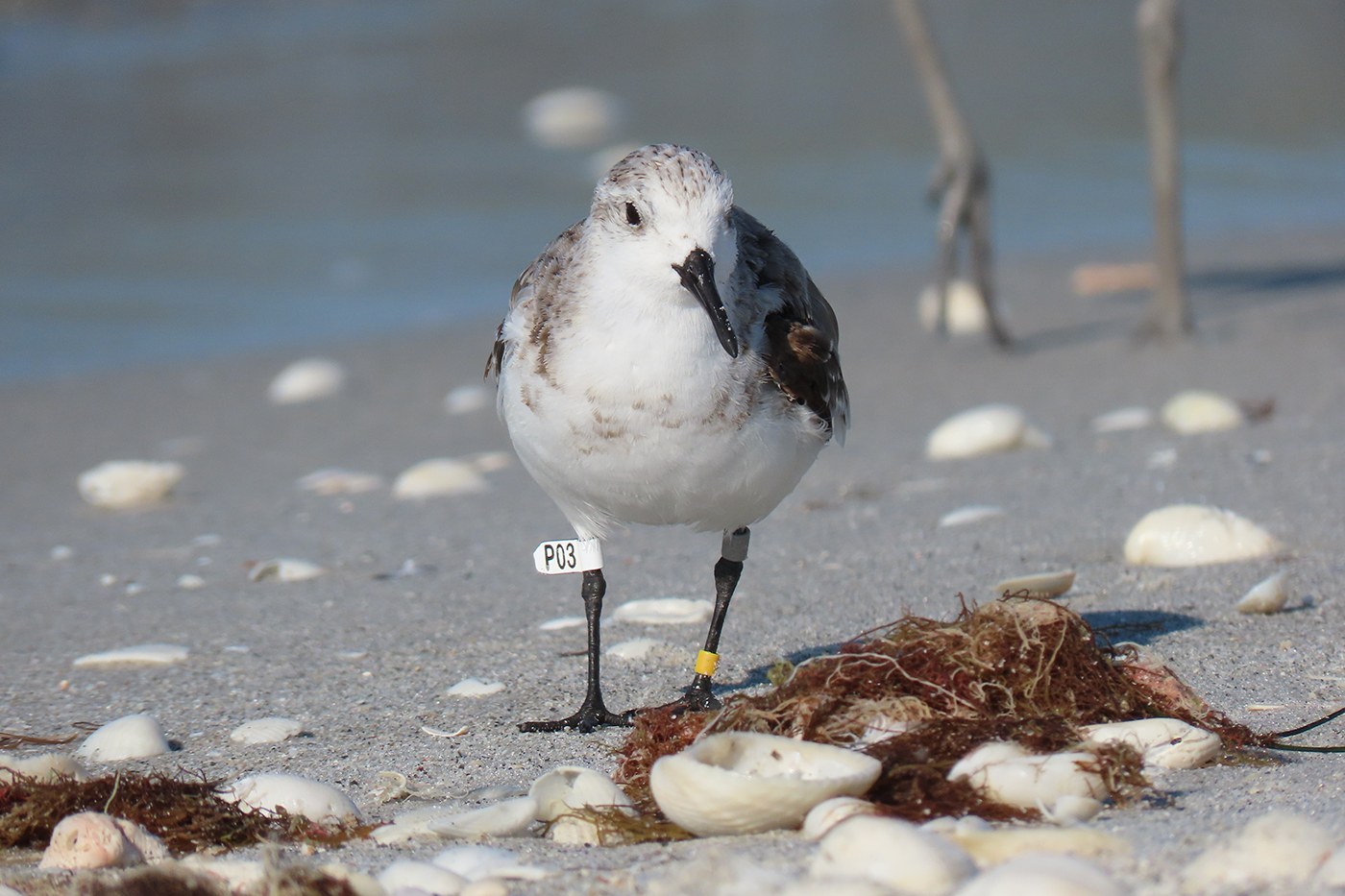 Familiar sanderling P03 back on Sanibel

The end of the summer means the return of many migratory and wintering birds to Southwest Florida’s beaches. One of the smallest and most common, sanderlings (Calidris alba), are already starting to arrive.

The birds are returning from their summer breeding grounds in the Arctic tundra, where they’ve paired up with their mates and raised their young. Now that the breeding season’s over, sanderlings are migrating back south for the winter.

One well-known sanderling on Sanibel is P03. This individual was banded in May 2015 at Chaplin Lake in Canada by researchers from the University of Saskatchewan, and it was re-sighted for the first time in April 2016 on Captiva Island by SCCF Shorebird Biologist Audrey Albrecht. Since then, the bird has come back to Florida every winter and seems to prefer the west end of Sanibel for its wintering grounds.

“We’re ecstatic to report that P03 has returned for the 2022-23 non-breeding season,” said Shorebird Intern Elsa Wilson, adding that P03 was first spotted by the SCCF sea turtle team on Aug. 16 and again by shorebird staff in early September. “We expect P03 to stay with us until May before returning to the Arctic.”

Before heading to their Arctic breeding grounds in late spring, sanderlings transform from pale gray to a cinnamon brown color and become more aggressive and territorial as their hormones begin to change. However, you can still see sanderlings on Sanibel and Captiva during the summer months, as juveniles aren’t yet ready to breed. These young sanderlings gather in small flocks during the summer and maintain their pale gray plumage.

Sanderlings’ small size and pale coloring tend to get them confused with a less common Florida shorebird, the snowy plover, which has a small nesting population on Sanibel that SCCF staff monitor every February-August.

“Many beachgoers think they’ve seen large flocks of snowy plovers, when really they’ve seen flocks of sanderlings,” Wilson said, noting that two distinguishing differences between the two species relate to beak size and feeding behavior. "Sanderlings have a longer bill than snowy plovers, and sanderlings feed by continuously probing the sand with their bills to look for food, whereas snowy plovers are visual foragers that feed in a start-stop motion."

Sanderlings have one of the widest wintering ranges of any shorebird in the world and can be found along almost any coastline.