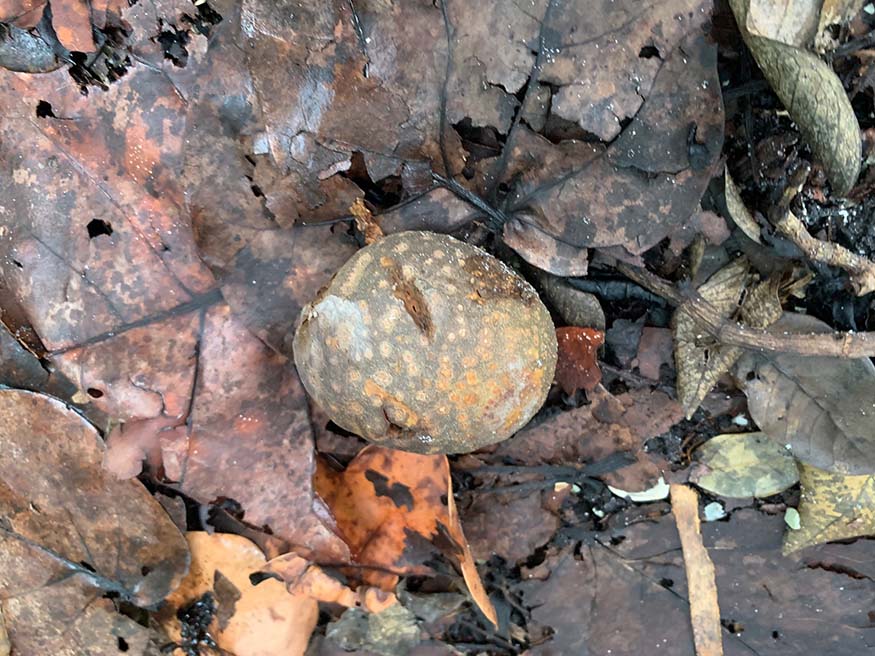 While walking trails or driving around Sanibel, sporadic patches of large, heart-shaped leaves covering shrubs or traveling up the stem of high canopy trees, such as cabbage palms, can be seen. These invasive vines smother native plants by choking out sunlight and dominating the landscape. Air potato (Dioscorea bulbifera) is one of the eight exotic plants that the City of Sanibel prohibits people from planting or transporting.

Air potato is an exotic herbaceous vine that is native to tropical Asia. It arrived in the United States in 1905 and is now considered one of the most problematic invasive plants in the state. It is a real problem on Sanibel, especially if left unchecked. By late summer and fall, the full effect of its presence can be seen in occupied areas: Blankets of heart-shaped leaves sometimes completely cover shrubs and trees. These vines can grow roughly eight inches a day, reaching up to 70 feet into the tree canopy. During the winter months, when the plant dies back, many people are deceived into thinking the problem is over. However, regrowth starts again in late spring and quickly returns to its highly noticeable state.

This vine is called air potato because it spreads by aerial tubers called bulbils, which look like potatoes, that fall to the ground. The “potatoes” can be as small as a grape or as large as a cantaloupe in a variety of shapes, but they are typically round or oval. There are no male plants in Florida; they are only female so new plants begin solely from these dropped bulbils.

Treatment for air potato requires diligence. Firstly, all the bulbils on the ground should be picked up a couple times a year to prevent new plants from forming. If a new plant has started growing from a potato, they should be pulled out of the ground. However, the entire bulbil must be taken out as well, or it will likely grow back. Herbicides, such as glyphosate products and Garlon, are commonly used to treat infestations. The state has released a biocontrol insect to help slow down air potato growth by damaging the leaves. This appears to be effective, but the results are still being studied.

Note: There is a common native vine on Sanibel called moon vine (Ipomoea alba) that looks a lot like air potato to most people. It can be aggressive in some areas by blanketing low shrubs much like air potato, but the leaves are much smaller and narrower.