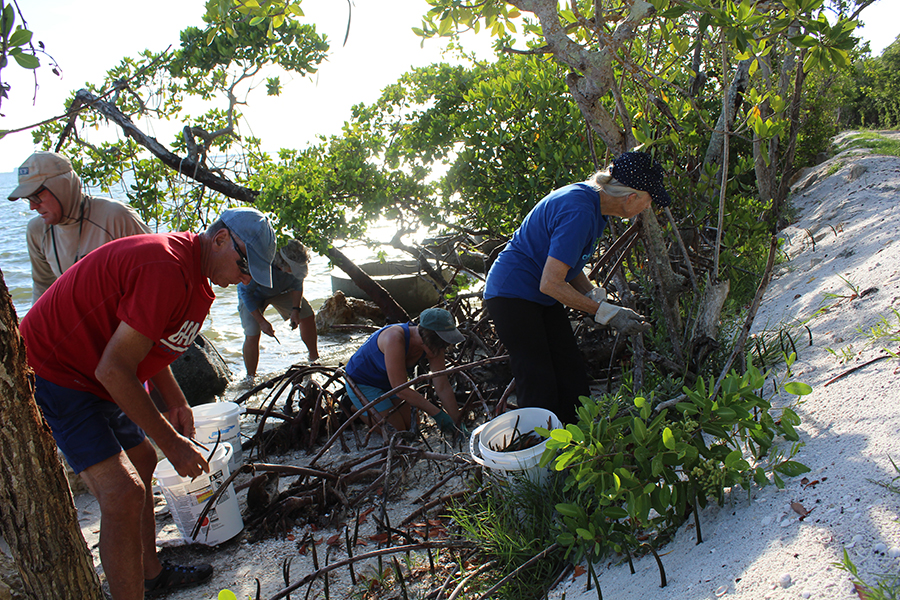 A Day in the Life of Coastal Watch

It’s a bit after 9 a.m., and Tracie Collins is already waist-deep in San Carlos Bay off the east coast of Sanibel hurriedly corralling mangrove propagules into a bucket.

A dedicated volunteer, Collins is assisting the Sanibel-Captiva Conservation Foundation’s (SCCF) Coastal Watch program to restore mangrove habitat along one of the island’s most vulnerable shorelines along Woodring Road and Woodring Point. The hundreds of mangrove propagules planted by Collins and other Coastal Watch volunteers will hopefully establish and grow to help protect the shore against inevitable erosion.

“Without mangroves, people who live here would eventually need a boat to get to their house,” said Coastal Watch Director Kealy McNeal as she gathers empty buckets that were filled with propagules at the beginning of the morning. “This project is important not only because we’re restoring the shoreline, but we’re helping the community understand the importance of mangroves and the threats that face our islands.”

Collins, who lives in Fort Myers, started volunteering a year ago with SCCF’s Sea Turtle Program. When she found out about Coastal Watch, she didn’t hesitate to get involved.

“I love doing this work — I’m always the one asking what more can be done,” she said. “I’ve learned so much about our coastal environment and am having fun along the way.” 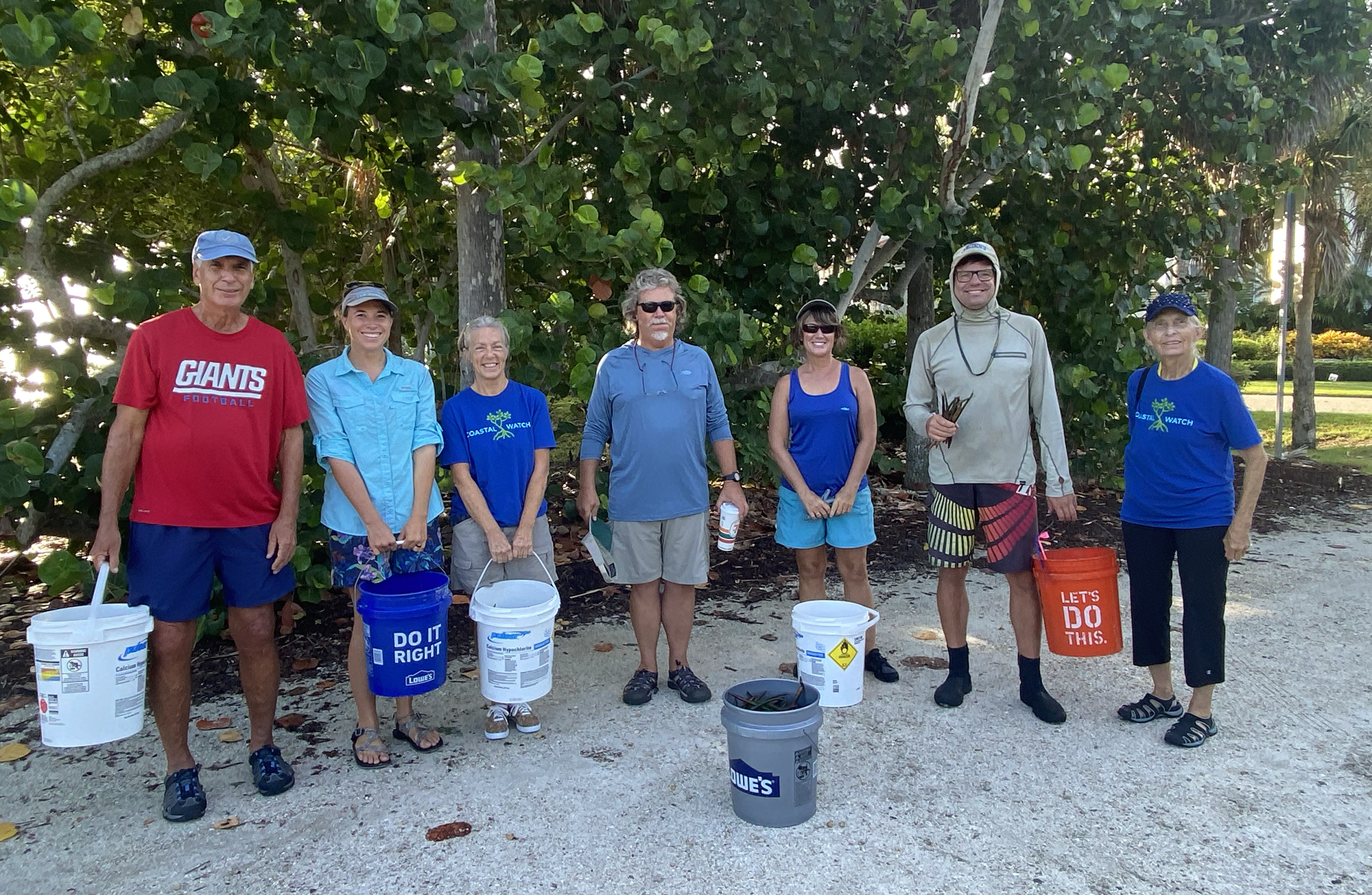 Other volunteers attending the Woodring Road planting all have their own story — like Julie Weaver (pictured third from right), who moved from Colorado about a year ago with her husband. A retired special education teacher, Weaver said she’s thrilled to be dedicating her time to helping the environment.

For Fort Myers resident Jim Brown, the outing was his first Coastal Watch endeavor, and he didn’t come empty-handed. He’s been collecting mangrove propagules along the Sanibel Causeway and soaking them in water to give them a head start, which he eagerly brought to the planting. The work’s not easy for Brown — a retired sheet-metal worker with back problems — but with some knee pads, gloves, and a little perseverance, he’s unstoppable. He plans to keep gathering propagules for wherever they're needed next. 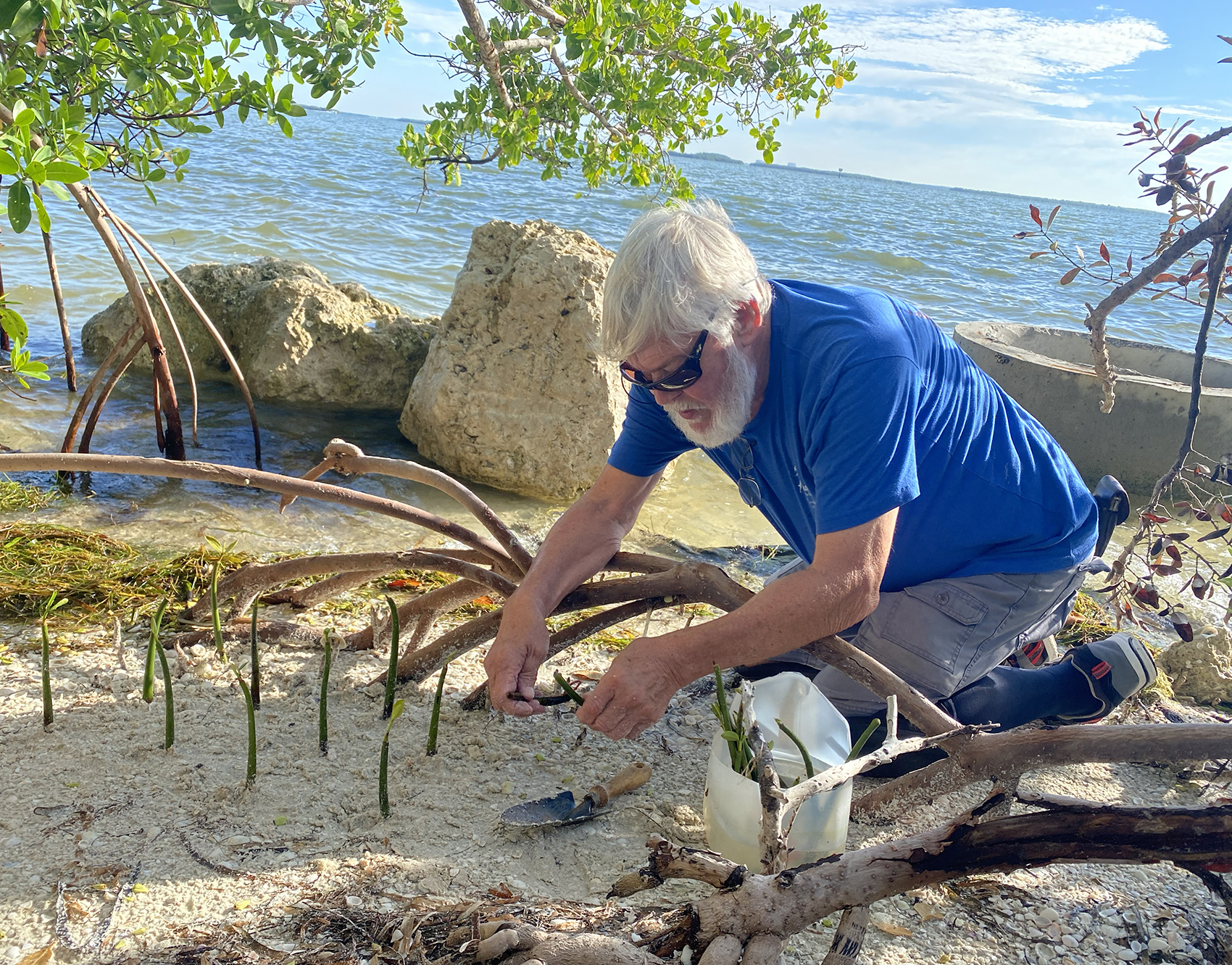 Coastal Watch is a bit like a growing propagule itself — the program began as the Sanibel-Captiva chapter of the Florida nonprofit Solutions To Avoid Red Tide (START) more than a decade ago. It soon evolved into its own initiative under the Sanibel Sea School, and eventually SCCF. Today, the program coordinates a wide base of volunteers to assist with marine conservation projects such as mangrove planting, oyster reef restoration, beach litter cleanup, and more.

Over the past year, hundreds of Coastal Watch volunteer hours have contributed to nearly 1,300 mangrove seedlings being planted and 3,200 buckets of fossils and oyster shell transported to Hemp Key and Benedict Key in Pine Island Sound. Volunteers also removed over 1,000 pounds of trash and debris from the Sanibel Causeway islands. Coastal Watch also helped install Beach Bucket Stations on Sanibel beaches for beachgoers to collect debris, and its Adopt-A-Mangrove program has led to over 500 red mangroves being taken by “foster” parents to be cared for until they are returned and planted at a shoreline restoration site.

“We couldn’t do this work without the help of other SCCF staff from the Marine Laboratory and the Sanibel Sea School, who help us with things like materials, permitting processes, and manpower,” McNeal said.

The newly planted mangroves along the Woodring Road shoreline are intended to serve as an added layer of natural protection to the City of Sanibel’s ‘Living Shores’ project that was constructed over the summer.

“This is a challenging site to restore, with high wave action from boats as well as storm fronts,” McNeal said. “I hope the mangroves we plant can grow and thrive and stabilize the shoreline a little bit to where we don’t have to continuously try to repair it. And for the people who live on Woodring, I hope this isn’t a problem they have to deal with anymore.”

Learn more about Coastal Watch and sign up to volunteer >>