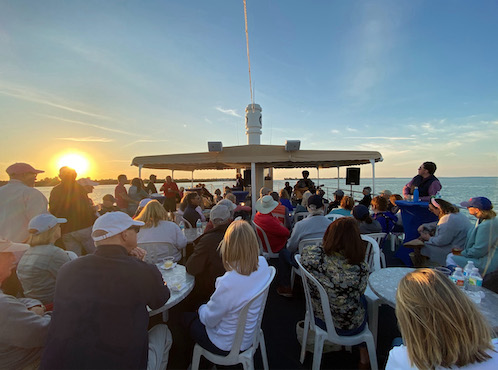 The cruise begins at McCarthy’s Marina on Captiva Island where guests will be treated to an individually boxed appetizer selection and an initial complimentary cocktail (thanks to SCCF supporters Jack and Janie), all included in the $100 ticket price. Guests will be able to purchase additional drinks from the bar throughout their time onboard.

Each cruise features a carefully curated artist, from a variety of musical genres, who will begin entertaining shortly after the boat departs. Music will ring out across the water as we take in the sights and enjoy the abundant wildlife of Pine Island Sound. After cruising and relaxing for approximately two hours, the Lady Chadwick will put us in a prime sunset viewing area to catch the elusive “green flash” as the performing artist “plays” the sun below the horizon. This is a truly magical experience that you will want to enjoy over and over. A short sail back to the dock puts you back on solid ground just in time for dinner.

Covid vaccinations and masking whenever in enclosed areas are strongly encouraged. If you are feeling sick or experiencing any symptoms , please do not attend the event and you will be given a full refund. 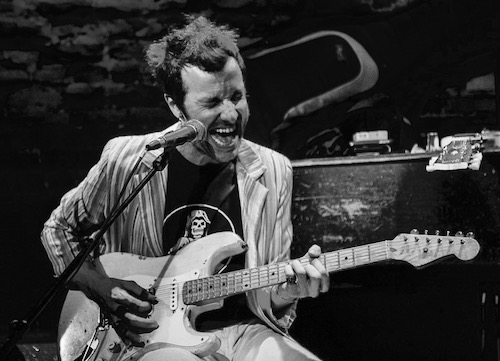 Ryan Scott is a New York-based musician, and most notably, a guitar man. He’s been described as a genius, axe murderer, and shredder extraordinaire. Ryan embodies rock ‘n roll and soul in its purest form, influenced by the blues-rock guitar lineage, New York’s Jazz tradition, New Orleans R&B, Brazilian psychedelia, and much more. His mastery of technique, groove, and aesthetic are undeniable. With a technical expertise way beyond his years, he delivers freshly crafted tunes and wildly energetic live performances. After a performance at the 2017 Ground Up music festival, David Crosby tweeted, “Saw one of the most crazy good ROCKING guitar player singers ever last night. I think his name is Ryan Scott.”