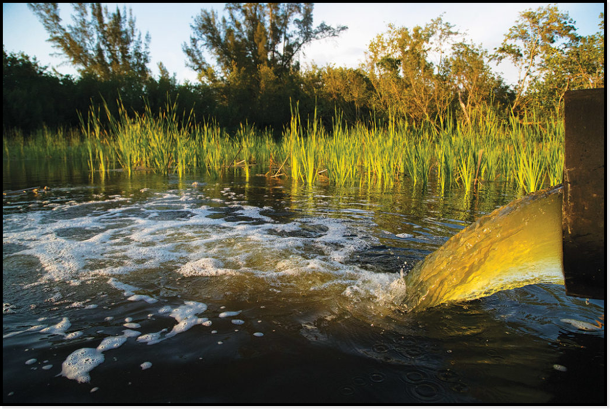 As part of the City’s water management system, the Jordan Marsh Water Quality Treatment Park treated more water in over a short period of time in September than it has since opening in March 2019.

“Even though the Sanibel Slough must periodically be allowed to discharge to prevent flooding, the Jordan Marsh is reducing the amount of nutrients, such as nitrogen and phosphorus, allowed to escape,” said SCCF Marine Lab’s Research Associate Mark Thompson.

On September 14, the Jordan Marsh reached its highest level ever about 24 hours after most of the rain from Tropical Storm Sally had stopped.

“At that point, the marsh was discharging at a rate of about 2,000 gallons each minute, which is about twice the normal target flow,” said Thompson.

Although the flowrate was double, the water levels were still well within the design criteria of the constructed wetland, and there was no risk of overflowing its capacity, he added.

Thompson sampled the nutrient removal efficiency of the marsh one day after the peak discharge rates and found that the marsh was still reducing the phosphorus load through the marsh by over 75% and the nitrogen load by nearly 30%.

“The treatment marsh empties into a swale beside the bike path on the western boundary of the facility and the treated water flows back into the Sanibel Slough,” Thompson said.

“Vegetation in the marsh is key to nutrient removal. You will notice there is very dense and healthy. Vegetation cover in the upstream two-thirds of the marsh,” he added.

The water in Sanibel’s interior wetlands system and the Sanibel Slough (River) is very high in nutrients, and normally the City of Sanibel avoids releasing water into Pine Island Sound and San Carlos Bay to prevent polluting the estuary.

However, the City has a policy to release water from the slough whenever the water stage reaches a pre-determined critical level or if the water level reaches the weir’s control elevation.

During the rains in September, the critical level was reached numerous times and the City released water into the estuary through the canals on the east side of Sanibel.

The pumped water travels north and meanders westward and southward towards the discharge, which is located next to the bike path in the southwest corner -- where you often find birds and one small gator waiting there for fish to slide into their mouths.

As the water flows through the marsh, vegetation and wetland soils work to remove nitrogen and phosphorus, delivering treated water back to the Sanibel Slough.

Even in the dry season this distance is not significant– six inches to two feet usually, but in the wet season the groundwater elevation is usually above the bottom elevation in the marsh. 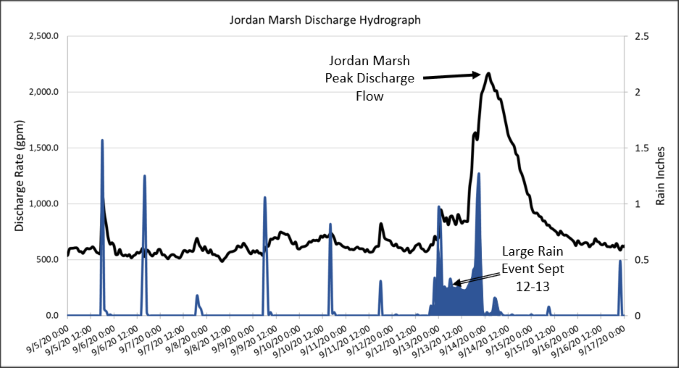 Water inside the marsh is basically floating on top of the groundwater table. The footprint of the entire Jordan Marsh includes six acres of City land plus a 1.3-acre portion of SCCF’s conservation land known as the Andrea Waitt Carlton Family Tract on the Bob Wigley Preserve.

“So, in the dry season, the marsh water elevation is controlled by the pumps,” Thompson said. “However, during wet season and especially during prolonged storm events such as the ones we experienced in September, the pumps will turn off and the marsh water level can be determined by the rising water table.”

In the last section of the marsh (adjacent the gazebo) the deeper water does not support emergent vegetation, and the nutrient removal effectiveness is much lower than in the densely vegetated sections.

Eventually submerged vegetation will be established there or floating islands may be installed to improve nutrient removal in the deeper section. Aeration or other features may be incorporated in the future to enhance the nutrient removal efficiency of the project.

If you have visited the marsh recently, you have noticed the maintenance vegetation trimming.

Periodically, some of the dense vegetation will be trimmed and removed from the marsh system. By removing some vegetation and taking it out of the system (compost), nutrients taken from the water by the vegetation are being removed.

The Jordan Marsh Water Quality Treatment Park is a great place to visit by bike and watch the wildlife, which gathers there to forage for the numerous fish and aquatic insects, or just to absorb the beauty and peacefulness of a freshwater marsh.

“It’s also a great place to appreciate how it serves this community in cleaning up our waters – as all wetlands do,” said Thompson.