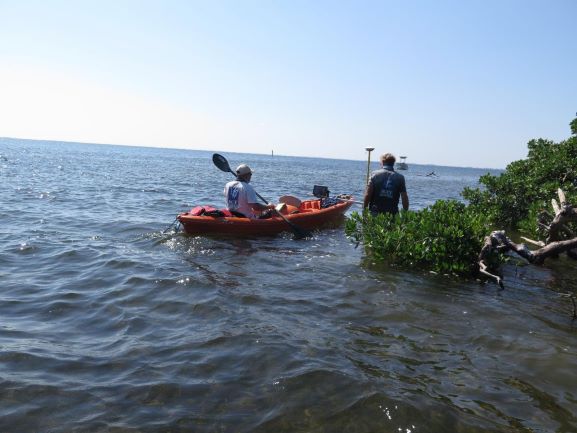 Prior to doing any restoration work, the SCCF Marine Lab recently assessed the elevation of Hemp Key. The elevation survey helped determine whether oyster shell additions or mangrove planting would be needed to increase the mangrove canopy cover.

Hemp Key is an island that is part of the Pine Island Sound National Wildlife Refuge. It has a Calusa shell mound and is used by many bird species for nesting. Aside from the shell mound uplands, the 7-acre island is otherwise all mangroves.

Mangroves and oysters do not overlap in their vertical distribution along the slope of a shoreline. Oysters typically are found between -0.25 metersand -0.75 meters while mangroves are found at 0.0 meters and higher.

“Using a Garmin depth sounder linked to a Trimble GeoXT GPS, the elevations were determined by mounting the sounder to the kayak as shown,” Milbrandt said. “The vertical accuracy is eight centimeters for the kayak surveys and about two centimeters for the equipment when using with a staff.”

The Marine Lab staff surveyed the entire area on Oct. 14 and created the digital elevation model pictured here. The team will now use the elevation model to determine how the island will be restored. 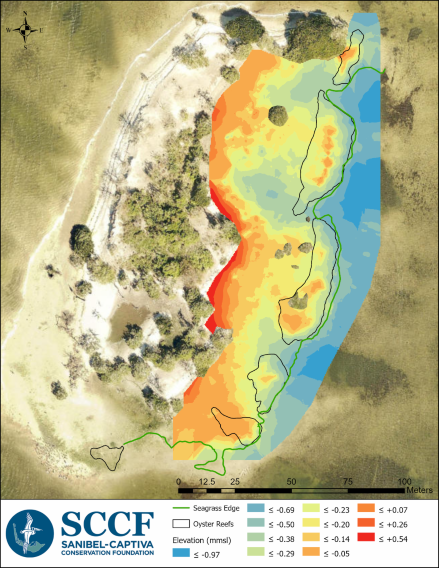 The Marine Lab and Coastal Watch will also need volunteers to fill buckets of oyster shell in November and December to deliver up to Hemp Key. Dates will be announced soon!